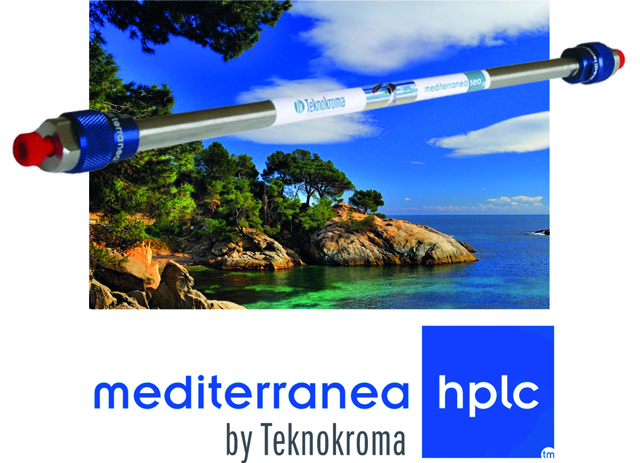 Moreover, the mediterranea™ sea18 column has been designed to show an excellent retention of polar compounds in a 100% aqueous environment without the problems of unwanted interactions which inefficiently endcapped conventional packings produce. Packing chemistry based on the new MED technology, “multifunctional endcapping deactivated”, achieves levels of deactivation, resistance to extreme pH values and versatility in its chromatographic applications never reached by conventional or polar-embedded reverse phase packings.The MED technology has been rigorously developed to achieve the maximum reproducibility, with the objective that its chromatographic separations will be, column to column, exactly the same. An essential condition for obtaining the global-best reverse phase packing is an extremely pure silica. The silica particle, on which the new mediterranea™ sea18 packing is based, is obtained from ultra-pure materials, using rigorously controlled manufacturing processes to ensure that the slightest possibility of contamination is avoided. The mediterranea™ sea18 silica required intensive optimisation of numerous processing factors to achieve a perfectly spherical, rigid and inert particle possessing unusually low metal content. The almost total absence of metals is one of the pillars over which the extraordinary properties of the mediterranea™ sea18 column reside.

Uracil is an indicator of column dead volume (non-retained peak).

Toluene/Ethylbenzene the selectivity factor between these two compounds can be used to characterise differences between packings mainly due to hydrophobic interactions.

Amitriptyline measures activity towards bases. It is an excellent indicator of the activity of residual silanols on the surface of the packaging.

The Mediterranean Sea 18 column has been subjected to the SRM870 test. This test designed by NIST, is currently considered to be the most recommended test for evaluating the most significant properties of a reversed phase column

The mediterranea sea18 is a 100 % pure reverse phase packing with the additional advantage that it has an excellent retention of polar compounds and also allows working with 100 % aqueous mobile phases without any limitations.

It is known that fillers known as "polar embedded" have in principle the advantage over conventional fillers in that they can work in 100% aqueous media and also show good behavior towards basic compounds.

However, these advantages are achieved at the expense of a lower retention of polar compounds and a lower stability of the column, and of a chromatographic behavior that cannot be considered 100% reversed phase, since secondary interaction mechanisms can coexist, which will be marked by the special nature of the polar functional groups anchored at the base of the hydrocarbon chains.

The mediterranea sea18 packing significantly exceeds all the advantages of "polar embedded" packings and does not show any of their disadvantages. Moreover, thanks to its specially optimized endcapping process (MED), extreme strength and lifetime of the column is guaranteed.

As can be seen, the chromatograms obtained after eluting the column with 100% water for more than 40 hours show no appreciable alteration in the retention times or in the efficiency of the chromatographic peaks.

The Mediterranean ™sea18 column also passes the Stop Flow test, designed to highlight the "deweting" phenomenon that usually occurs in highly deactivated ODS type columns and which consists of the irreversible expulsion of the water included in the pores of the packing.